According to Brian, he grew up being the awkward kid whose gym teacher sensed such a lack of interest in sports that she sent him to play by himself during tennis season. Brian's interest in sports grew a bit over time, but never as a player of them. He felt compelled by individual sports, and started skiing, and he particularly enjoyed watching the Olympics.

A connective tissue disorder that showed up in his early 40s resulted in Brian giving up skiing. Brian soon found himself watching the Winter Paralympics and even preferring watching disabled sports to traditional sports because, he says, "I felt like they were my people." Fast forward to just a few years ago, and Brian learned of an opportunity to meet Rico Roman, a Paralympian who plays for the U.S. Sled Hockey team. Rico would be facilitating a Sled Hockey clinic presented by Seattle Adaptive Sports, and Brian didn't want to miss the chance to meet him.

Brian was surprised when volunteers didn't give a second thought to getting him into a sled and pushing him out onto the ice. He gave it a whirl and to his astonishment, did not fall over very quickly. After that, Brian started coming to weekly Sled Hockey practices. "What I found was a sport that is very inclusive. If you put an able-bodied person in a sled, they are immediately at our level. If I'm ever going to play a team sport, this will be it!" said Brian, at age 58.

Meet Brian and Jacques at our Gala!

Since becoming a member of the Seattle Kraken Sled Hockey program, Brian's favorite memory with the team is from November 2021, when the team participated in the NHL Sled Classic for the first time ever. Brian summarized the experience: "First of all, the camaraderie of all the other teams welcoming the Kraken for the first time was wonderful. You can go out on the ice to try to smash everyone up against the wall and afterwards go have a beer together and enjoy yourselves. Beyond that, it's our own teammates--a very special group who really care for each other. It's a kind of family and since I've never been a part of a team, this was a unique experience for me."

Now 60 years old, Brian is the oldest member of the Seattle Kraken Sled Hockey team and is just now learning to properly take a shot at goal. He says although he doesn't consider himself competitive, he is competitive enough to "want to smash everyone else into the wall or knock their sled into a distant part of the compass!" Not to worry--Brian has his biggest fan, Jacques, who keeps him in check from the box. Jacques is Brian's Assistance Dog who he was partnered with in July 2021.  Jacques has quite the following on Kraken Fan pages and was even featured in the game commentary at the NHL Classic. More importantly, Jacques provides Brian with mobility assistance that allows him to be more independent. Brian estimates that he has undergone 65 surgeries in the last 16 years, aimed to maintain as much functionality as possible for his hyper-mobile joints.

Brian wants sled hockey to gain the same popularity as other adaptive sports, like wheelchair basketball. He wants more disabled athletes to become aware that there is a team in the Seattle area and come give it a try so that the program can grow and accommodate different levels of competition. Next up for the Kraken Sled Hockey team is the Disabled Hockey Festival in April 2022 (Pittsburgh, PA). As with any sport, travel gets expensive. With no nearby opponents to compete against, traveling around the country is required in order for teams to experience competition. If you'd like to help athletes like Brian have these opportunities, please consider making a donation today! Our athlete scholarship fund helps offset participation expenses, including travel, so that cost is never a barrier to participation. 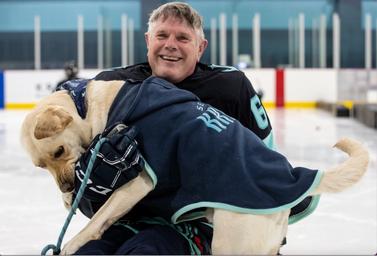